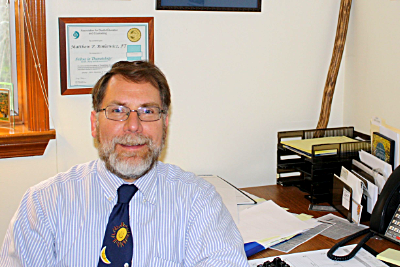 Rev. Matthew Binkewicz graduated from Hamilton College with a BA in Biology and Russian Studies (1986), Christ the Savior Russian Orthodox Seminary with a BTh (1993), and from the Catholic University of America with an MA in Theology (1995). He is also a Fellow in Thanatology (FT) accredited by the Association for Death, Education, & Counseling (ADEC).

He began working with the terminally ill in 1991 as a theological student. After his ordination to the priesthood in 1994, Rev. Binkewicz began to provide spiritual care for his parishioners as well as hospice patients. He is now the Bereavement Coordinator and Pastoral Care Coordinator at Hospice of the Finger Lakes in Auburn, NY, offering spiritual support to patients and their families and counseling for those grieving the death of a loved one.

Matthew also serves as an adjunct professor at the State University of New York at Canton, teaching courses on death, dying, and bereavement.  Rev. Binkewicz began teaching at SUNY Canton in 2014, and in 2017 won the SUNY Chancellor’s Award for Adjunct Teaching. He also serves on the New York State Department of Health Funeral Directing Advisory Board.

Rev. Binkewicz is the author of, Peaceful Journey: A Hospice Chaplain’s Guide to End of Life, 2005, Spiritual Care Companion-Guidance as End-of-Life Approaches, 2007, a contributor to the Cambridge Dictionary of Theology, 2010, and Prayers and Consolation for the Bereaved (2014).

Rev.  Binkewicz is the Pastor at St. George Orthodox Church, Lansing NY, and serves as a group facilitator for the Ithaca Childbearing Loss Network.